Integrated Workspace Management Software (IWMS) includes a suite of integrated asset and space management functions that provides operations managers with all the tools they need to manage their enterprise facilities (see previous blog article, What is IWMS Software? ). This current article focuses on the top five benefits of IWMS software, with an emphasis on the needs of the healthcare industry.

A software’s true benefits manifest themselves in how the software is used, what goals it is expected to accomplish, and whom it is meant to benefit. These “real world” benefits cover a wide spectrum based on the industries and markets in which IWMS is deployed. Rather than attempt a wide sweep of multiple industries, this article focuses specifically on the 5 top benefits realized in the healthcare industry:

Sometimes the greatest cost savings happen even before a facility budget is formed—at planning. To demonstrate this, let’s ask a common question that arises at a fast-paced hospital:

Doctors complain of a lack of patient exam rooms. Should we build a new wing?

An IWMS system gives decision-makers fast access to accurate space data, such as occupancy, square footage, availability, etc. Making space planning decisions based on accurate facility data saves the hospital from potential losses due to decisions that are reliant on faulty facility assumptions.

Answering the above question becomes far less risky with cloud-based IWMS software that can readily provide material information such as:

Some IWMS systems provide advanced sensor-based functionality, like VLogicFM Tracking, that can provide real-time occupancy data to objectively determine actual occupancy, not projected or expected occupancy. These actual occupancy logs settle the issue of whether doctors’ concerns are due to a short supply of patient exam rooms, or some other reason, such as lack of information about available exam rooms.

Because IWMS systems can associate multiple types of data with each of your facility’s definable spaces (patient exam rooms, surgery, lobby, etc.), they are ideal platforms for calculating chargebacks and cost reimbursements, such as Medicare/Medicaid reimbursements.

According to Definitive Healthcare (see Statista.com), Medicare and Medicaid make up over a third (34.6%) of a typical hospital’s overall revenue. Moreover, this large chunk of revenue can only be claimed through a complex reimbursement process that varies by state. A hospital must submit its bill along with details about its clinical practice and accurate metrics about the facility in which the practice was performed. This includes facility data such as:

Collecting this information manually can easily lead to inaccurate reports—that the hospital will be liable for. The slow pace of collecting manual reports will also substantially delay receipt of Medicare/Medicaid reimbursement funds.

Hospital facilities are some of the most highly regulated buildings in the US. In particular, NFPA fire and life protection standards, as adopted by the Centers for Medicare and Medicaid Services(CMS), mandate a dizzying array of compliance requirements. These requirements, generally referred to as the Life Safety Code, amount to over 800 pages. The code regulates every critical building component in healthcare.

The requirements are so complex that hospitals often hire compliance specialists to manage the process of preparing for the periodic Life Safety Code compliance surveys. Loss of certification can shut down a hospital’s practice.

For example, to check sprinkler system compliance, a compliance officer can instantly show all sprinkler heads with one quick search on the floorplan or on a data list. The VLogicFM IWMS system will even let you show the connection between each shut-off valve and the sprinkler network it controls.

IWMS makes the compliance officer’s life much easier, by giving him or her rapid and comprehensive access to all life safety components at a touch of a button. As most IWMS systems run on desktops and mobile devices, you can even display life safety drawings on an iPad as you walk the facility with the Joint Commission inspector!

In summary, IWMS software makes it easier to meet and raise safety standards, and fulfill the demanding expectations of the Joint Commission and CMS reviewers.

Increasing space productivity is one of the key benefits of deploying IWMS software. The software’s comprehensive grasp of facility metrics lets you know what you have, who is using it, and where it is being used. The result: vastly better space utilization and productivity. This is especially true now, during this unprecedented pandemic.

The Covid pandemic has caused waves of disruption that have affected areas well beyond its health effects. In the facility management market, for example, our research shows that many US employers expect 60% of their employees will be hybrid workers (taking turns working from home or traditional office)—even after Covid and its variants are countered with vaccines and treatments.

Let’s face it, most of us have experienced facility breakdowns at one time or another in our current or past offices. Unfortunately, most office workers rarely know who to go to for a solution to the facility problem. As a result, irate workers flood overworked admins with complaints about a broken AC, a flooded bathroom, or a weird, unidentifiable smell permeating the hallways— all real issues I have personally experienced at the office!

In a fascinating study by the Center for the Built Environment (CBE) at UC Berkeley (“Linking Occupant Complaints to Building Performance,” Building Research Information, 2012), researchers pointed out that occupant complaints could be used to understand and gauge a buildings real performance, which could improve planning and construction in the future.

Case in point, the beautifully designed, mega-sized Salt Lake City International Airport could have used this research before opening its doors earlier this year. From the designer’s and city’s perspective, the architecture was a triumph and the huge size was deserving of Utah’s booming economy and hub-airport status. However, travelers absolutely hated the new airport! Poor signage created havoc as incoming and outgoing travelers couldn’t find their way to baggage claim and the right gates. The airport also lacked adequate people movers for helping travelers get from place to place in this very large complex. 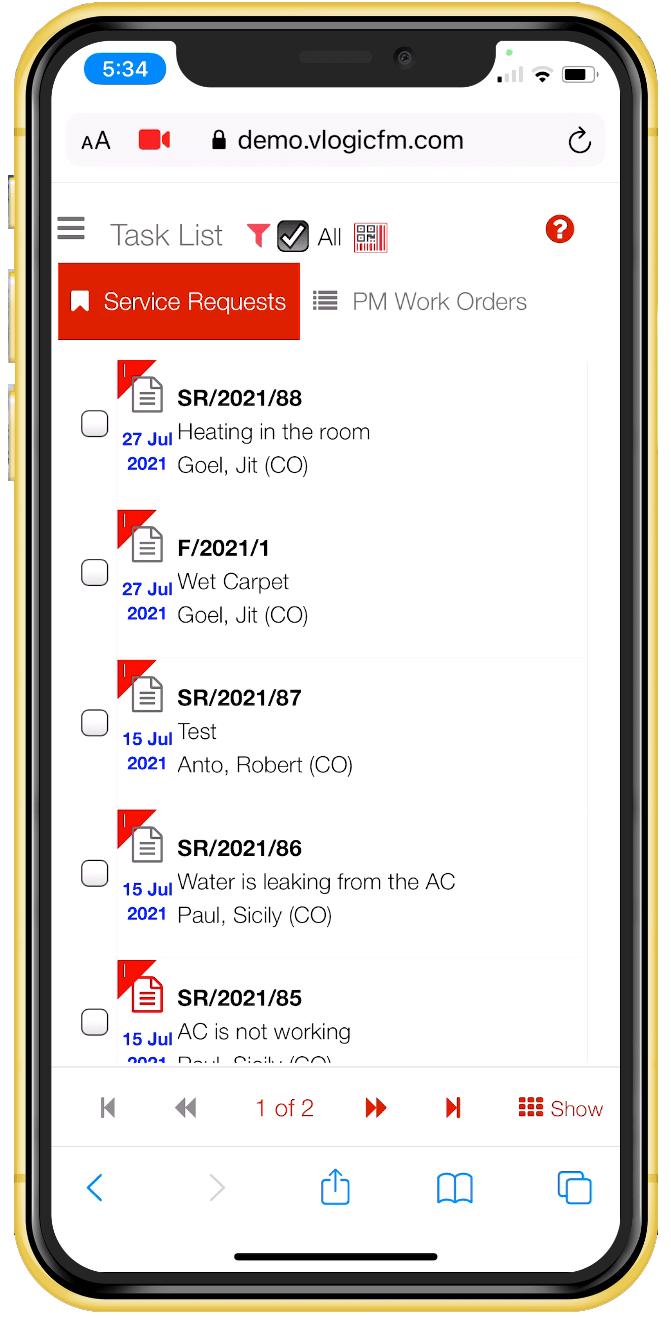 Adequately managing occupant satisfaction has a direct impact on occupant productivity, and ultimately the building’s underlying performance. Most IWMS software have built-in functions for managing asset work orders on a preventative maintenance basis and additional functionality to manage on demand work requests for unscheduled asset breakage.

For example, VLogicFM’s Work Order and Help Desk solution covers both kinds of tasks, and also deploys an iPhone app, as part of its solution, to directly manage building occupant complaints.  TheTask Manager app lets building occupants log in and send work request to the IWMS system. The system then follows a workflow that assigns a technician to fix the problem and finally reports back to the occupant for input on whether the fix solved the initially reported problem.

The immediate beneficiary to this IWMS complaint management system is the office admin, who no longer has to field everyone’s complaints!

The IWMS benefits we have discussed so far are primarily derived from an IWMS solution’s many software functions. In contrast, this fifth benefit arises not from IWMS software functionality, but from the solution’s overall impact on how managers operate their facilities. The following are a few examples of how IWMS software streamlines common operational tasks:

Drawings management. Because IWMS solutions require accurate CAD drawings, managers had to (1) migrate all their PDF and paper drawings to CAD, (2) develop one composite master from each of their drawings (with the help of the IWMS provider), and (3) store the as-built masters on the cloud. These tasks had an immediate impact on drawings management efficiency. Before IWMS, finding and sharing plans was an arduous and confusing process of wading through multiple media formats and various versions. After IWMS, managers are able to rapidly access accurate drawings at any time and anywhere—with confidence that the as-built is accurate AND the right version.

Facility reporting. A significant part of a facility manager’s job is reporting on key facility metrics such as distribution reports for Medicare/Medicaid reimbursement, occupancy reports and stacking plans, employee room assignments, etc. IWMS makes reporting on these key metrics much, much easier. Rather than weeks of manual data gathering and reporting, managers can now use the IWMS system to generate reports instantly—and share these reports with other non-system users by exporting to  Excel, Word or PDF.

With IWMS, the inspection process is substantially streamlined. The inspector no longer needs reams of paper forms and pens. Rather, the inspector simply (1) launch the IWMS inspection app on their tablet, (2) scan the door’s QR code, and (3) choose an appropriate inspection condition from a drop-down menu—that’s it. There is no transcribing as the data input on the tablet is automatically synced to the server. A much easier and faster process.

For new customers without any facility software tools, IWMS software provides all they need to manage their facility. Before deployment, customers will need to put in some effort to onboard existing as-built drawings, but the benefits far exceed these initial exertions. Furthermore, customers reap IWMS’ recurring benefits year after year, over the long term. Many of VLogic’s own IWMS customers have accounts spanning 15-20 years…and counting.